How to enhance learning with storytelling?

How to crash 9 myths on demotivated students? 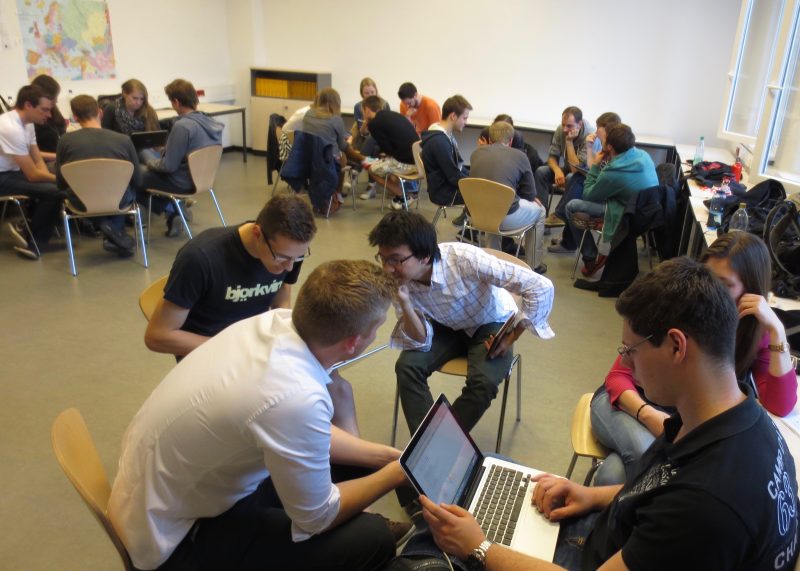 How to crash nine myths on demotivated students nowadays? And how to enhance learning with storytelling and story sharing?

Nowadays, teaching and learning are mingling and time and energy investment in collaborative working to enhance collective intelligence is an important step to enrich the process of educating. Why? Because young people have got a lot to contribute and are eager to discuss critical issues and experience cultural similarities and differences rather than just hear about them. Hence, based on my academic teaching experience at two German universities and the intercultural communication classes for journalists in I would like to crash 9 myths we keep telling about youth today:

They do not listen to…

They do listen to, actually, even actively listen to the academic teacher and to one another, when their curiosity . Start your classes encouraging them to ask questions instead of telling them what they “must know” and you are on the path to awake curiosity and involvement. As soon as you introduce the idea of story listening you will notice how enriching the contributions will be.

They are not interested in social concerns and business challenges, just at their own careers…

Actually, I was overwhelmed about how critical the students of journalism are, regarding the challenges of nowadays. Driven by my own curiosity, I asked them to come up with themes that were meaningful to them and would like to highlight just a few of them here:

Additionally, there was a choice of interesting interviews, both audio and video, among others with:

They do not care and are not motivated

While listening to the radio and video interviews I noticed that the level of curiosity and involvement among the peers stayed constant.

As these young people came up with the above themes I knew the quality of discussions was guaranteed. What I have not assumed, though, was the fact that they were eager to take action to support those in need and were seeking to exchange with others how to proceed. This call for action and ideas what could be the next steps were more than impressive.

Actually, I have included the smartphones and the internet research into the classes. The results were fantastic. The secret of accelerated learning is learning on your own in the creative setting with peers. Just to give you an example: Instead of presenting the models of Cultural Intelligence and the Developmental Modell of Intercultural Sensitivity, I asked the groups to search for details and good examples on the internet and to present the results within a short period of time. The students were delighted and during the presentations did not have any difficulties to come up with their own stories to make the new knowledge more accessible to the listeners.

They are not concentrated…

The concentration span has become shorter within the last decades – that is true. Nevertheless, when you interwove theoretical knowledge with time to exchange stories and interactive activities, the abstract models become vivid and the concentration rises, as the intrinsic motivation to understand and to be able to apply these pieces of information rises.

They do not know how to behave

I still remember classes for academic teachers at one of the Polish Medical Universities, where the participants told me that foreign students did not know how to behave. When I asked them to share examples of such “misfitting” behavior, one of the professors mentioned students from the Middle East wearing their jackets in classes. Winters in Poland can be pretty tough and many students from this corner of the world saw snow for the first time in their lives and were continuously freezing. They would not even think that their behavior could be interpreted as disrespectful.

One of the teachers of the same workshop said that students were not allowed to drink water during their classes. I got puzzled, as classes went for hours and hours.

In order to enhance concentration we need to pay attention to students’ and our own needs. Is anyone yawning? Maybe it is the highest time to open all windows? Is anyone tempted to look at the smartphone display every two minutes? How about a short break to have a sip of water? Introducing rules on behavior during classes is especially a good idea when we have classes for students from different corners of the world. Our world of obviousness can vary from their habits a lot. Talk to them and explain why.

They are passive consumers and do not show any initiative

How should they show any initiative and be active if the dominant narrative at some universities still is the top-down Many times facilitating learning processes is more difficult than “classical teaching” and therefore reduced to the minimum. Changing this narrative can be the beginning of a huge mindset change, regarding not only learning but also collaborating in interculturally diverse groups and teams.

They are bored and disinterested

Maybe they really are bored, especially when they notice that instead of the invitation to take action they are invited to listen to lectures for hours… A good example are classes on intercultural issues, focusing on talking “about cultures”… As I am convinced that talking to people from various cultures is more effective than talking about them, I sought opportunities to create spaces for dialog. On one morning a group of sixteen students and I visited a synagogue in Hannover where a young Jewish guide (their age) invited us to ask questions. For many young people, it was the first time they had an opportunity to talk to a representative of the Jewish community, instead of talking about the Jewish traditions without any first-hand input. There are so many opportunities to go out and find such places for dialog. Believe, it is really hard to be bored when you listen to new stories and new doors are just opening.

They are too critical and demanding

Maybe they are simply right with being critical and demanding? A lot has changed irreversibly and the systems are changing pretty slowly. Maybe it is the highest time to sit together and discuss what are the best ways to learn and to motivate each other?

Facing the above crush of myths, I would like to add one more aspect, regarding the teaching process. The traditional teaching is not working anymore. As nowadays every smartphone is giving more pieces of information within seconds than any expert in the field, the focus of teaching should be laid on the mixture of theory, critical thinking and interactive exchange focused on how to transfer the “lessons learned” into the praxis. Therefore our roles as educators are multiple. For more details check, please, the blog “How to enhance learning with storytelling?”