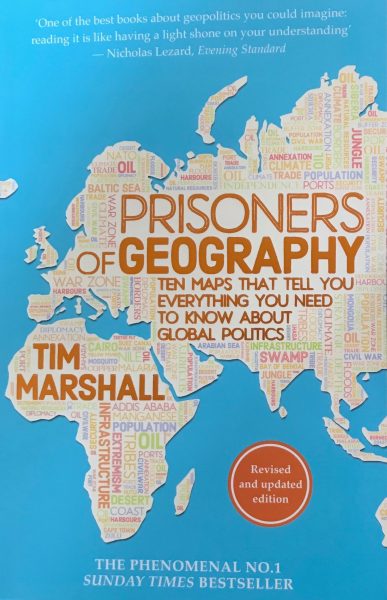 “Ten maps that tell you everything you need to know about global politics” – promises the subtitle of this Sunday Times bestseller written by Tim Marschall, a journalist (The Times, Sunday Times, Guardian, Independent) and editor at Sky News as well as a former reporter of the BBC radio.

And indeed, the promise has been kept. The author offers valuable and thought through insights into the geo-political strategies, driven by of the continents, countries, and regions. Tim Marschall devotes every chapter to a different region and starts with Russia, followed by China, USA, Western Europe, Africa, The Middle East, India and Pakistan, Korea and Japan, Latin America and the Arctic. As in every story, the surprising part is are the untold stories and the silence regarding several Asian and African countries, as well as Eastern European countries, and the entire continent – Australia is striking. Even though Poland and Republic are mentioned in the chapter on Western Europe (!), the dynamics of this part of the European continent mentioned only randomly.

As an interculturalist I highly appreciate the comment that shows the phenomenon of “losing face” in the new light – light of power: “Analysts often write about the need for certain cultures not to lose face, but it is not just a problem in the Arab or East Asian cultures – it is a human problem expressed in different ways. (…) American foreign policy strategists are as aware of the issue any other power.”

New geographical opportunities, such as breaking out of our planet into the Universe and challenges, such as climate change are going to dictate shifts in power. Such developments are not visible on the political maps so far. At the end of his Tim Marschall emphasizes the problem we all are dealing with in the 21st century: “Many of the technologically advanced nations are now making preparations in case they need to fight in space. (…) Although we have broken free from the shackles of gravity, we are still imprisoned in our own minds (…) and our primal competition for resources.”

Indeed, the humans need to learn how to think about themselves as the representatives of the Blue Planet and not competing tribes/nations/clans. It is the only chance to keep living in peace here and now.