How can we learn creativity from Leonardo da Vinci to design intercultural programs?﻿

Storytelling Museum. How does Louvre in Abu Dhabi mirror the ideas of multiculturalism, universalism, a​n​d globalization?﻿ 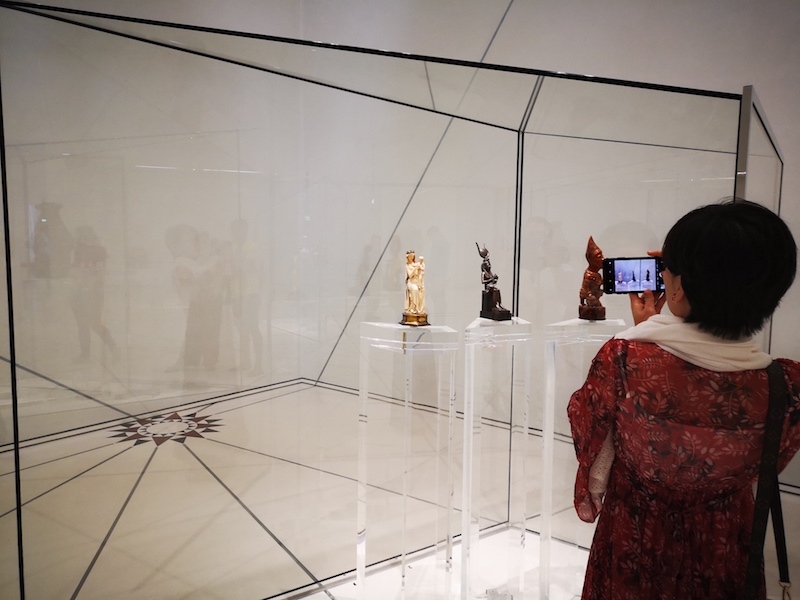 „At the beginning of the 21stcentury, the scale of communication around the globe seems to have transformed the planet into a global village. The last decade of the 20thcentury marked the end of a historical era in which the West had occupied centre stage.” What sounds like an introduction to an article in Financial Times or China Daily is in fact an inscription on one of the walls in brand new museum – Louvre in Abu Dhabi.

At the same time it seems to be a manifesto of the museum that aims to communicate the value of humanism, universalism and multiculturalism. But let us start with the beginning: “The age of post-colonial and multi-cultural globalization in which we are now living makes the need for a return to an all-embracing narrative of human coherence more urgent than ever before”, says Jean-François Charnier, the chief Heritage Curator and Scientific Director of Agence France-Museums in the first chapter of the Louvre Abu Dhabi guide (Charnier, 2018: 18-19).

The museum has made a great effort to break with the conventional mode of expositions based on styles and typologies, more dividing than uniting people from around the globe, and paid homage to humanity as a whole by displaying treasures of art created in the similar narratives in different spots around the world. The succession of the rooms housing this unique collection resembles a precious book containing of twelve chapters; each chapter representing the key period in the history of humanity:

The juxtapositions, contrasting the pieces of art and establishing dialog between them invite the visitors to merge into the exhibition with a solid dose of curiosity sharpened by the unexpected comparisons and to question the established meanings. The Grand Vestibule is the overture to this unique experience. The pieces of art displayed in the large glass cases in triads are shown to communicate similarities among different civilizations. And so you can experience the beauty of motherhood having a look at the Goddess Isis nursing her son Horus from Egypt (800-400 B.C.) next to Virgin and Child from France (around 1400 A.D.) and Phemba, the maternity figure from Congo (1800-1900 A.D.). Similar invitations to reflect on similarities among cultures are spread by Golden Masks from Peru, Northern China and Syria or Lebanon made in different centuries, Figures in Prayer from Greece, Gabon and Syria, Horsemen from Iran, Cyprus and China and Ewers from India, China, and Turkey. Additionally, Dishes with solar decorations, Houses of Dead, Hand Axes and Writing Cases from around the world depict the universal symbol of the circle as the sign of infinity, the value of immortality of the heritage and the wisdom passed on further generations, the beginning of our history, marked by the production of tools by the first homo sapiens and the value of the written word at different longitudes around the world.

Beneath the glass cases there are black lines, joining them in three dimensions – they are visible not only on the floor, but also on the walls and the ceiling. The lines drawn on the portolans trace the coast of the United Arab Emirates and the names of towns and cities in different languages mark places where the works of art on display in the Louvre originally come from. The merger of architecture and this unique display emphasizes the universal character of the entire exposition.

After such an esthetic and philosophical invitation to pose questions instead of searching for the known patterns, it is impossible to enter the next 12 rooms without curiosity and joy of discovery. Let us focus on some of them.

In the gallery called The Asian Trade you can see the Indian representation of the Buddha close to the Buddha in his Chinese representation. The introduction of Buddhism into China from India by pilgrims and the merchants of the Silk Roads led to the blossom ages of this religion in Northern parts of the Chinese Empire. Next to the artefacts from China and India, there is vast collection of objects filled with the spirit of design of Islamic Art which is omnipotent in this gallery as much as the spirit of influences across borders, regarding not only decorations but also use of certain materials, such as ceramics, tapestries and ivory in different cultures.

The Gallery called “The World in perspective” drives the invention of perspective, considered one of the major achievements in European art to the theories of optics developed in the Arab world, above all works of Alhazen, a scholar living in the tenth and the beginning of the eleventh century. La Belle Ferronnière by Leonardo da Vinci is one of the highlights of the collection, taking into account that the Italian painter is the author of only 15 paintings universally accepted. And so the gallery depicts the sixteenth century from different cultural perspectives with use of excellent pieces of art from around the globe.

The Gallery “At the Court of the Prince” contrasts among others the armours originally from France and from Japan and addresses the topic of art at the service of power in different places around the globe. What a contrast to the next Gallery called “A new Art of Living” when trade made exotic goods accessible to more and more people in Europe, Japan and the major cities of the Arab world in the 18th century.  It was time of peace, prosperity of the middle class in Europe who got fascinated by the Middle East and the Far East alike. Not only the iconographic themes got incorporated but also numerous efforts were made to produce porcelain and add metal frames to ceramics or incorporate lacquer into furniture. This fashion for turquerie and chinoiserie starting in the 17th century marked the unprecedented “Fernweh” – longing for far away places. In the Arab World the Ottoman, Safavid and Mughal courts held a similar fascination for the cultural trends within the Islamic circle of influence.

The radical changes introduced by the Industrial Revolution in the 19th and the trauma of two World wars in the 20th century led artists to reinvent art. New movements occurred and created the sphere of multi perspectives. Additionally, relations with objects vastly changed due to the mass-production and the omnipotent narrative of consumerism. All that is visible in the titles given to the following two galleries: “A Modern World” and “Modernity in Question”.

Entering the last Gallery called the “Global Scene” shows that the world had turned into what Marshall McLuhan had called a global village even before Tim Berners-Lee created the World Wide Web in 1991. “The economic rise of most continents has given way to a multipolar and multicultural world in which artists have taken it upon themselves to invent a different version of modernity. (…) Creative works have become mirrors of our collective memory stirred by identity issues, the self as a narrative, as well as our concerns about our fragile planet.” we can read in the lines of the text on the wall of the last room, where the Louvre in Abu Dhabi tells farewell to its visitors.

In these turbulent times the question of identity is emerging like the phoenix out of ashes all over again. “Family Tree” a photo collage as a fruit of Body Art and calligraphy by Zhang Huan reminds of the roots of identity. The artist asked three calligraphers to write sentences he dictated on his face, through the entire day. Many stories and names of people were written down on his face until it was blackened with ink, making Zhang unrecognizable. This unique piece of art examines the weight of collective memory and family history and the individual’s roots of identity. It poses the question to every visitor: “What is your story, based on the combined stories of cultures that influenced your life?”

During several hours I had spent in Louvre in Abu Dhabi I got a new perspective on globalization, multiculturalism and universalism and experienced the unique merger of art history, storytelling and the current political narrative on my own skin. The Louvre in Abu Dhabi is definitely an attempt to show the universalism in human history. At the same time it is a manifestation of the birth of new world order. The Eurocentric era is definitely over. As Peter Frankopan put it in his newest publication: “Silk Roads are rising. They will continue to do so. How they develop, evolve and change will shape the world of the future.” (Frankopan, 2018: 253).